- the first Nguni-Brahman X in Australia -

At 32 months old she is weighing an ideal 400kg for the Australian conditions. She was first joined “in the dark through the fence” (not part of the breeding program) at 10 months of age and had her first calf when she was 19 months old.

Her second calf was born a year later and is now thriving. Dr Roux says she is the model Nguni-cross female, maintaining optimum breeding condition at 400kg while calving twice in under 30 months.

“Her calving ease was phenomenal. She required no assistance and experienced no placenta problems. Her disease resistance has been very robust and she endured only a very few ticks and flies from time to time

“She is a great mother, is calm and as easy to handle as a pure Nguni, has a well attached udder with descent easy accessible teats and produces plenty of milk.

“These traits are dominating traits brought in by her young 530Kg Nguni sire. Her Brahman dam had to be taken off the breeding program due to her low-hanging bottle teats that her calves found difficult to access”. Dr Roux says Poplap clearly demonstrates what would be expected from a composite breed crossed with the stable genetics of a naturally adapted animal with 6000-year genetic history. “In Poplap's case it certainly seems as if the Brahman is behaving similar in a cross breeding program”, Dr Roux said. “It would be expected that in close to 100% of cases, the genetic profile of the F1 offspring would be enhanced and completely dominated by the deep entrenched genetic traits of the adapted parent”.

“These properties render the Nguni with its superior genetic profile as one of the most valuable cornerstones in any cross-breeding program – especially in the harsh conditions of the southern hemisphere that is home to this ancient breed.”

Dr Roux said Poplap's experience clearly demonstrated the financial gains possible from crossbreeding with Ngunis when exploiting the hybrid vigor of a naturally adapted breed. He said that if only fertility was taken into consideration in the equation (comparing a 90% rate to say 55% for the Brahman) with weight taken as a constant, this would suggest a 64% increase in profit. However, the early indications are that the calving rate is well in access of 90% with a superior growth rate of the Nguni crosses. If you combine this with expected outcomes of superior browsing capabilities, roughage conversion rates, decreased calf mortality, low inset cost and superior beef quality, profit-increase forecasts could approach and even exceed the 100% mark!! 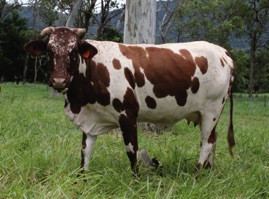